Perhaps no month can show so many moods as January,* particularly when we get a taste of real winter as in the past few days.

On a clear crisp morning wave-spray has transformed every twig on the shoreline into a jewel.

Even grains of sand have conspired with the water and the temperature to shape new faces, if only for a day. 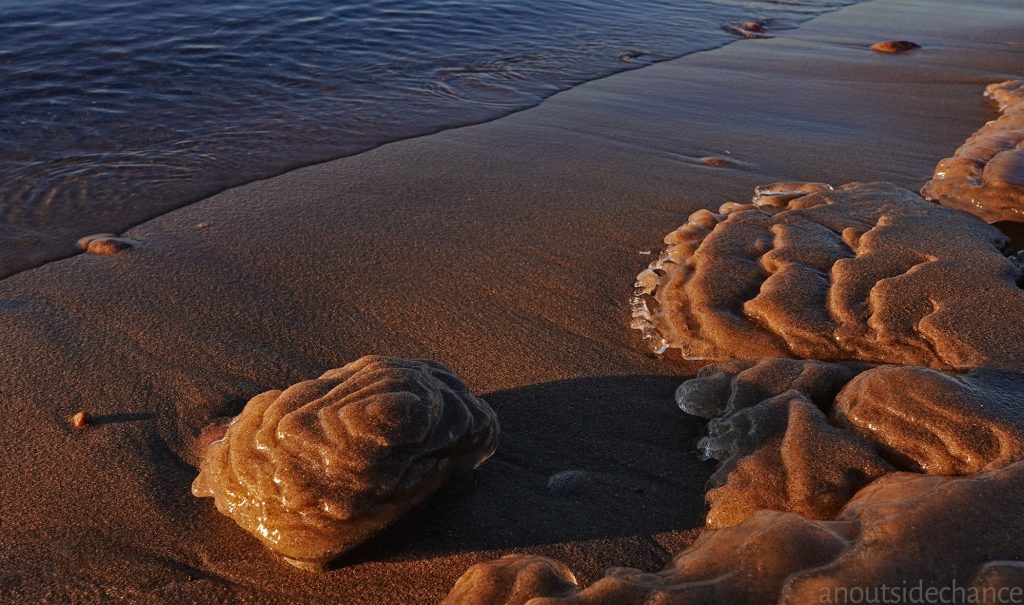 On a quiet cloudy morning, though, colours are understated, asking for careful study. 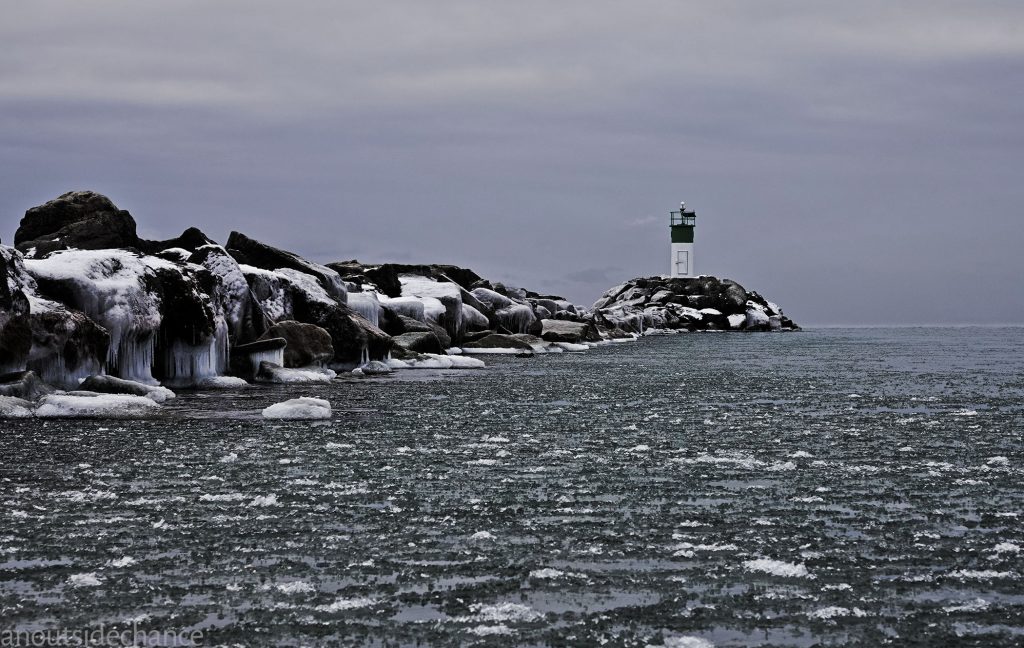 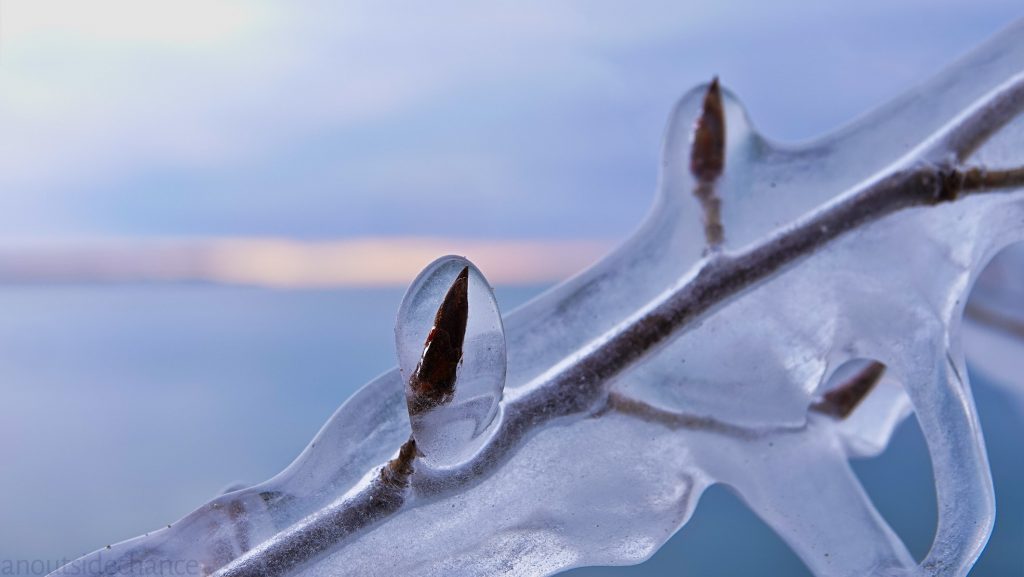 Much closer to the ground, a small thistle managed to grow in a thin layer of gravel on the breakwater last summer, and stands strong still. 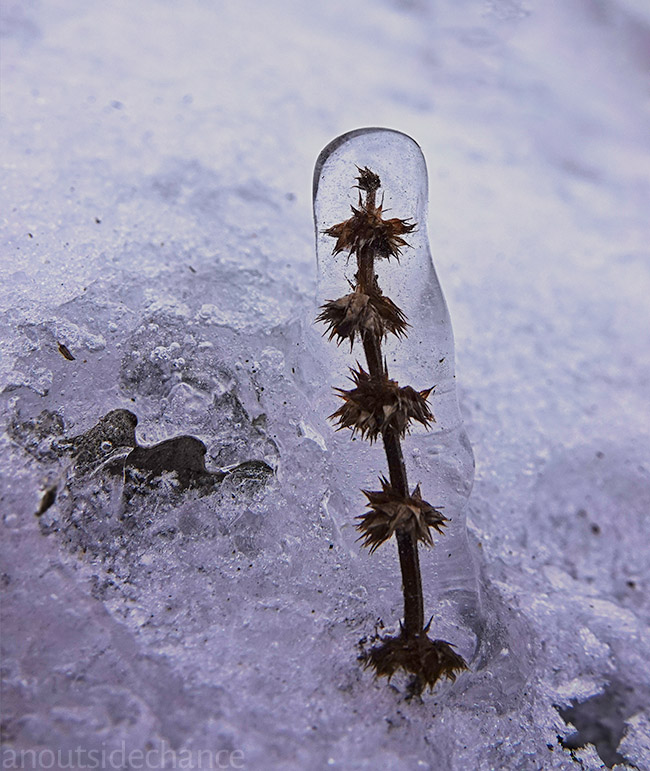 The January sunlight can be harsh, glancing low across the water through clouds of steam. 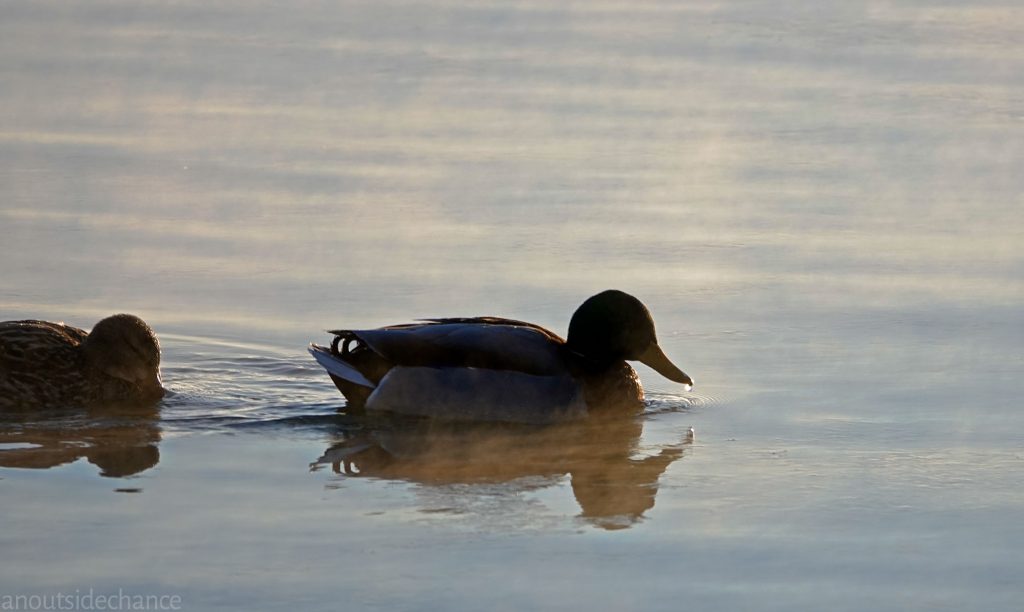 On a clear morning the tones ring out most intensely right around sunrise. 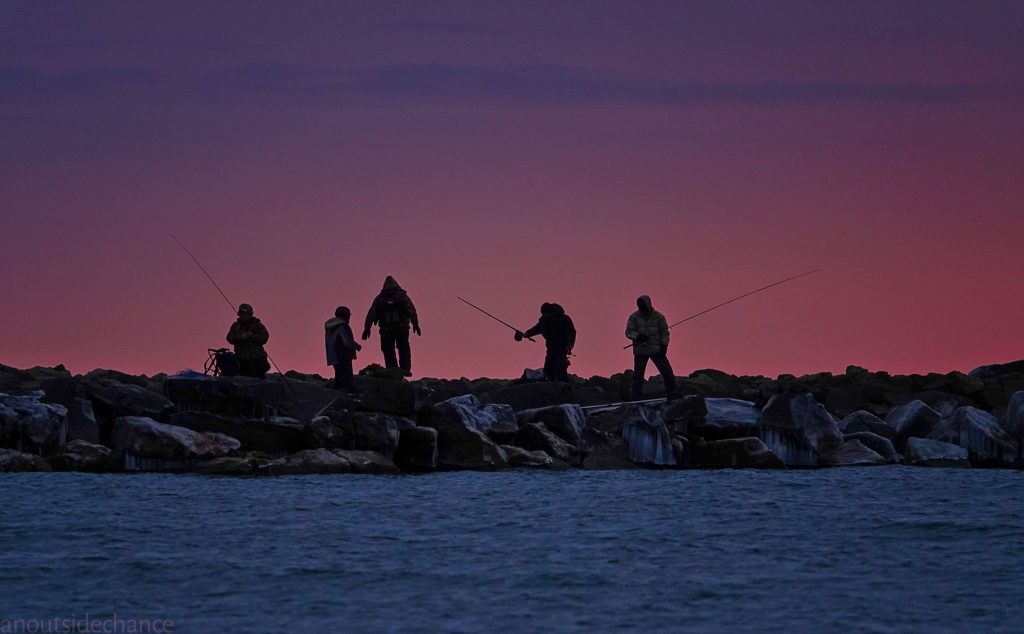 The atmosphere catches colour: in a tiny channel carved through a small shelf of shore ice, soft waves push moist air up against the ice and new designs shape themselves. 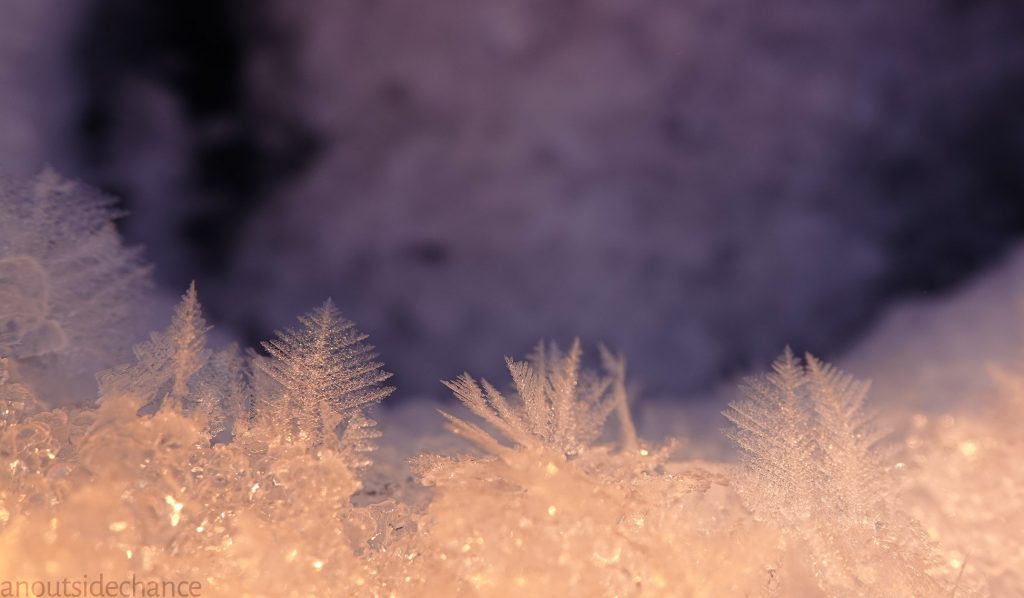 Even the rocks get a make-over just for this moment. 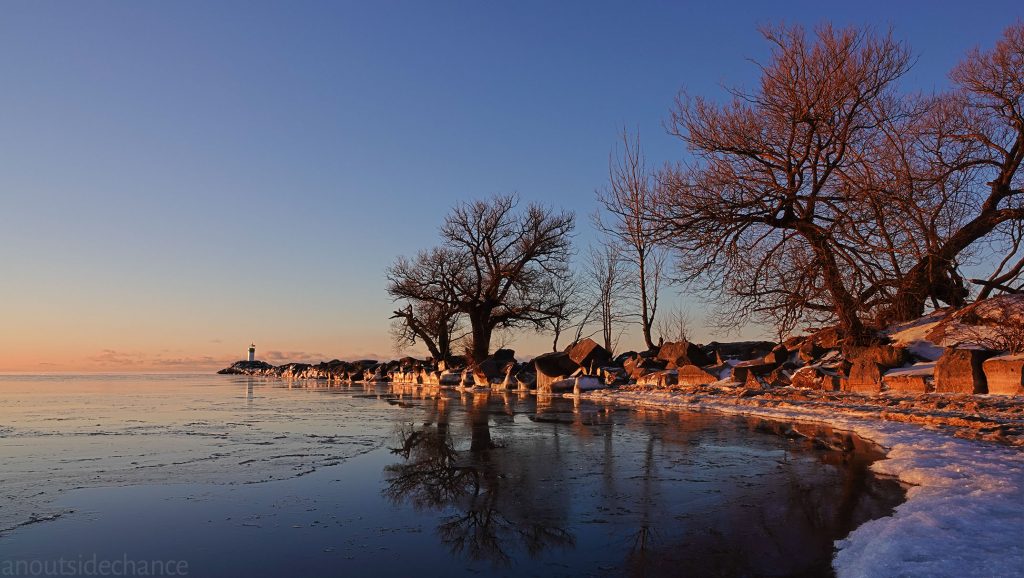 Back at home the mid-morning sun thaws a collection of American Bittersweet berries, calling hungry Starlings.

If these berries tasted better they wouldn’t have lasted this long. A flock of Starlings, once they get hungry enough, can polish them off in minutes. 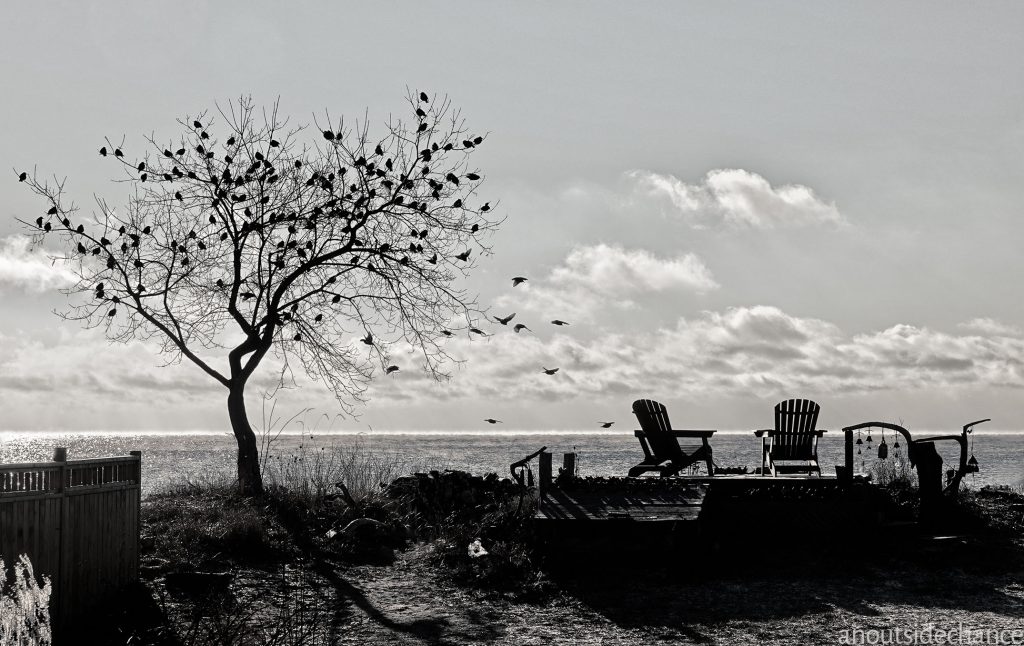 *It’s one of the top twelve, for sure. 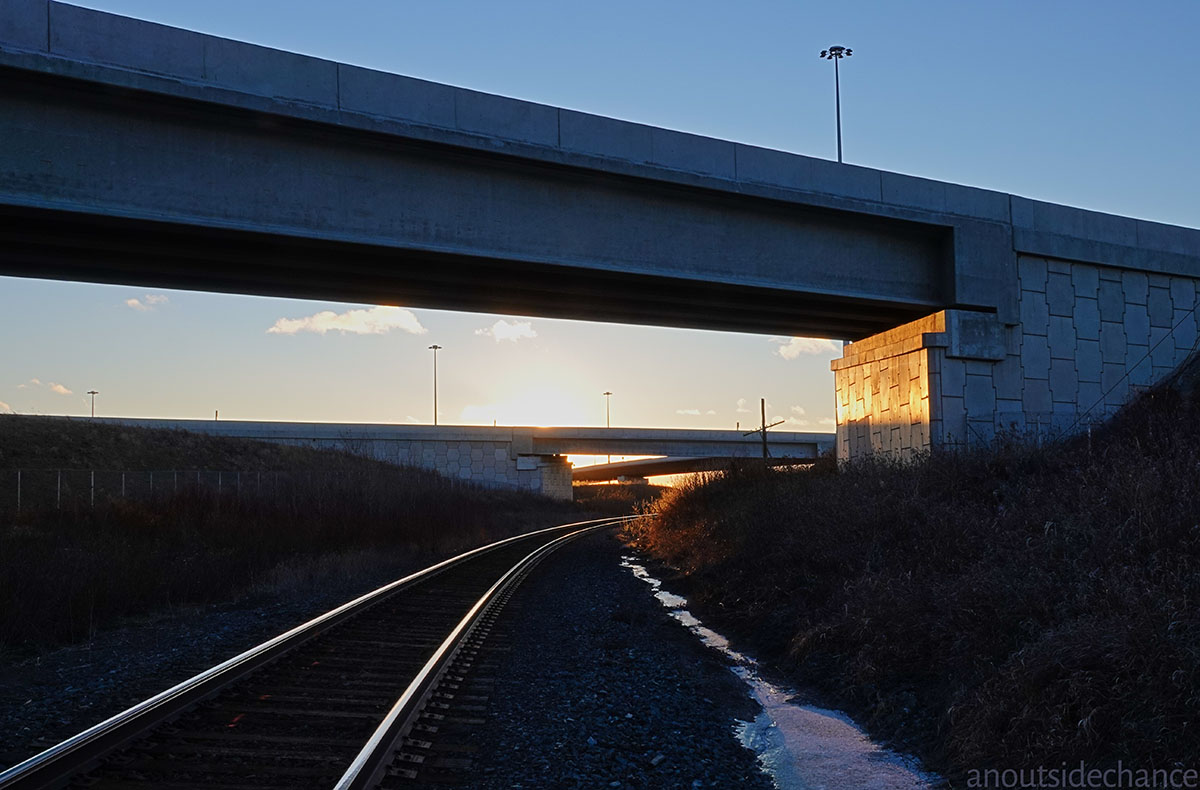 At the mention of our “fossil economy” or “fossil civilization”, most of us probably think immediately of “fossil fuels”. But as Mary Soderstrom’s recent book points out, not only our energy supply but also our most important building material has origins in fossilized ancient life. 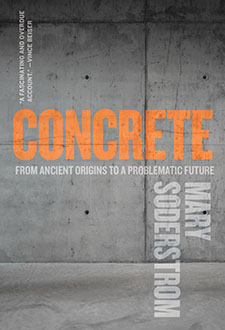 Concrete, by Mary Soderstrom, is published by University of Regina Press, October 2020. 272 pages.

In Concrete: From Ancient Origins to a Problematic Future, Soderstrom shows us why cement is the literal foundation of nearly every strand of the capitalist economy. She also explains that, just as the fossil fueled industrial complex is deeply dependent on concrete for its infrastructure, so too the concrete industry is deeply dependent on fossil fuels. And these dependencies can’t be unwound easily or quickly, if at all.

By weight, of course, concrete is primarily made from sand, gravel and water – but the all important ingredient which turns the slurry into “manufactured rock” is cement. And cement, Soderstrom writes, “is in large part made from rocks laid down hundreds of millions of years ago when the shells and carapaces of organisms settled in the bottom of seas.” (Concrete, page 3)

The particular rock is limestone, which is abundant, widely distributed, and relatively easy to quarry and crush. But to make a cement from limestone takes energy – a lot of energy.

Ancient Greeks and Romans invented one form of concrete, and some of the resulting buildings and aqueducts still stand today. Quicklime was the basis for their concrete, and production of this lime needed only the heat from firewood. Making lime, Soderstrom says “had a large impact on the forests of any region where people had figured out how to make the substance.” (Concrete, page 44)

For uses such as marine piers and aqueducts, early concrete also depended on particular types of sand that had been forged in the heat of volcanos. The best such sand came from Pozzuoli, near Vesuvius, and such sands are still known as pozzolans. That kind of sand is not so abundant nor so widely distributed, and the global dominance of concrete as a building material had to await more recent technological developments. 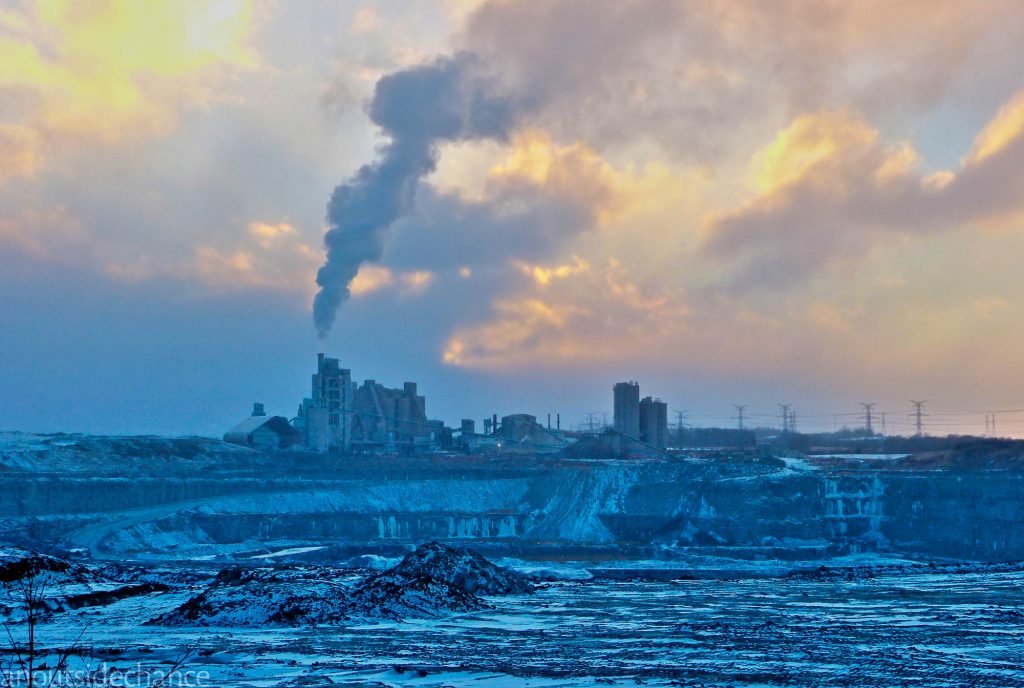 This limestone quarry and cement production plant on the north shore of Lake Ontario is operated by St. Marys Cement, a subsidiary of Brazilian corporation Votorantim Cimentos. February 2016.

A key step came in the nineteenth century through the work of French engineer Louis Vicat. In his efforts to recreate the intense heat of volcanos, he developed kilns that chemically transformed crushed limestone into a forerunner of today’s ubiquitous Portland cement. These industrial volcanos had their own serious implications:

“The temperatures required for doing this are nearly twice as high as that needed to make quicklime, about 1,450 degrees C, and therein lie two of the great problems created by our enormous use of modern concrete: where to get the energy to attain those temperatures, and what to do with the greenhouse gases emitted in the process.” (Concrete, page 25-26)

The primary fuel for cement production remains coal, supplemented in some areas with pet coke (a dusty carbon residual from petroleum refining), ground up tires, plastic, even some wood byproducts. To date, renewable energy sources are not up to the challenge of producing good cement at quantity. That is because, Soderstrom writes “the end product of hydro, solar, nuclear, tidal, and wind power is electricity .… [S]o far it doesn’t produce temperatures high enough to make cement from the basic rock.” (Concrete, page 47)

Another key development arose because concrete, as hard as it may be, does not have great tensile strength and therefore doesn’t, by itself, span gaps very well. The skyscrapers and bridges essential to our cities and transportation systems need the addition of steel to concrete. Ridged steel rods, woven into forms before the concrete is poured, are commonplace today, but Soderstrom writes that it took much trial and error to produce a steel that would adhere to concrete in the right way. That steel was also very expensive until development of the Bessemer furnace in the 1850s. Only then could concrete take its place at the foundation of the industrial economy. 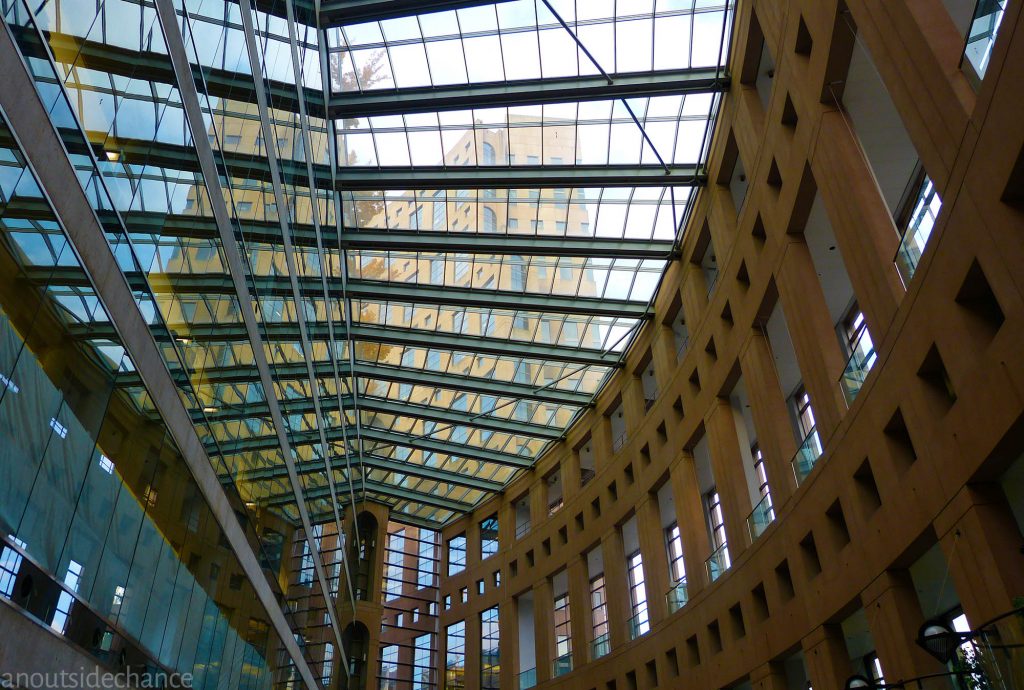 Flashy constructions of glass, steel and concrete throughout our cities are one face of concrete’s dominance. But Soderstrom reminds us that concrete is equally important in humble abodes around the world. Do-it-yourself builders in edge cities rely on a bag of cement, a few buckets of gravel, and an old barrel in which to mix up a slurry – and the result may be a new wall or a solid floor in an improvised one-room dwelling. The government of Mexico, she notes, helped combat the spread of parasites by paying for $150 of supplies, allowing small home owners to replace their dirt floors with concrete.

“The desire to provide sanitary housing for ordinary working families has been the motor for concrete construction since the middle of the nineteenth century,” Soderstrom writes. (Concrete, page 69) There are echoes of this trend everywhere. In American suburbs, even where the walls and roofs are made of lumber, the homes nearly all stand on concrete foundations. Concrete was critical in rapidly reconstructing urban housing in Europe following World War II. And such construction continues on a gargantuan scale in contemporary China: “the United States used 4.5 gigatons of cement between 1901 and 2000, while China, as it ramped up its housing and infrastructure offensive, consumed 6.6 gigatons in only four years.” (Concrete, page 102)

Roads, bridges, houses, apartments, offices, factories – if concrete was important only in those categories of infrastructure, it would be a big enough challenge to replace. Yet Soderstrom illustrates how concrete is closely implicated in the food we eat and the water we drink. The formerly desert valleys of California, which now supply such a huge proportion of fruits and vegetables for North America, only became an oasis – perhaps a temporary one – due to massive concrete dams and hundreds of kilometres of concrete aqueducts and concrete irrigation ditches.

In other areas hundreds of millions of people live in areas that would frequently flood were it not for concrete flood control structures – and which might flood, catastrophically, if these structures are not maintained. Meanwhile hundreds of millions more depend for their drinking water on concrete canals that divert water away from its natural flow. This is true in the US southwest, for example, but on an even greater scale in China. “Already, Beijing is getting 70 percent of its water” from the South North Water Diversion,” Soderstrom writes – and this project is far from completion. 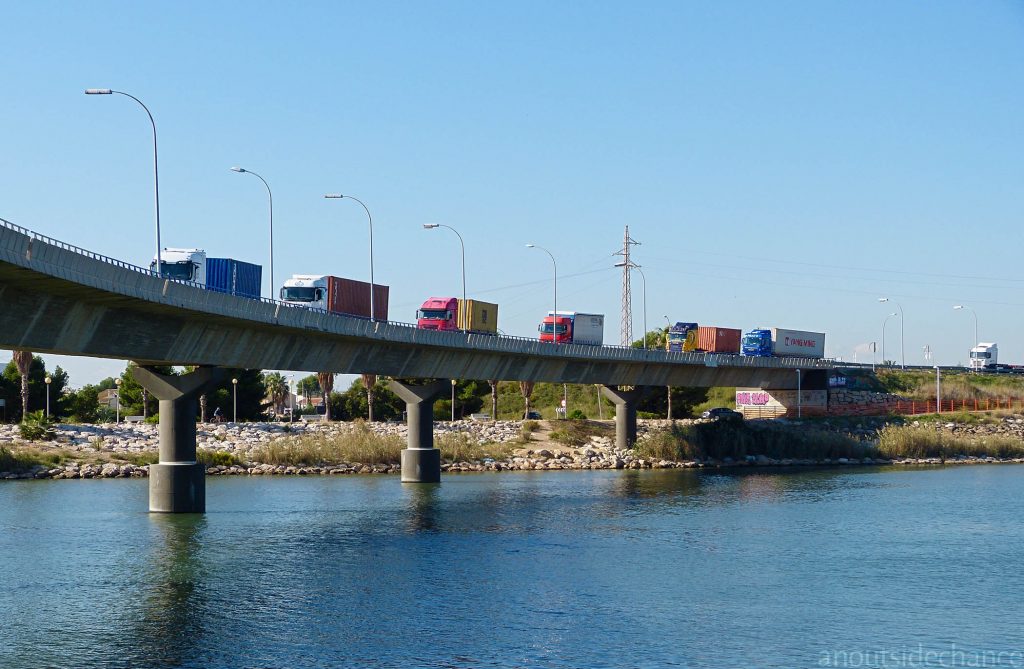 An attempt to paint a full picture of concrete’s history and current importance is necessarily wide-ranging, and boundaries around the subject would necessarily be subjective. In the discussions of military strategy, social housing policy, and the politics of carbon taxes, there were many points in the book where I felt the focus on concrete was getting a bit too soft. Yet Soderstrom’s goal is much appreciated: she wants us to understand the vast scope of the challenge we face in transforming our concrete civilization into something sustainable.

It is now widely realized that the production of concrete is a major source of carbon emissions, and that we must reduce those emissions to net zero in the next few decades or face imminent collapse of the planetary life-support systems. Concrete: From Ancient Origins to a Problematic Future gives us glimpses of many efforts to reduce the environmental impact of concrete, through use of different fuel mixes, carbon sequestration, or technological enhancements that reduce the amount of Portland cement needed in a given project. None of these experiments sound reassuring, given the rapidity with which we must transform this critical industry, and given that it would be difficult if not impossible to simply forgo the use of concrete, within decades, without mass casualties.

Other books are better positioned to discuss the technical challenges involved in making sustainable concrete, or making sustainable infrastructure without concrete. But Soderstrom has performed a real public service in showing us the rich history of the seemingly dull material that undergirds our way of life. 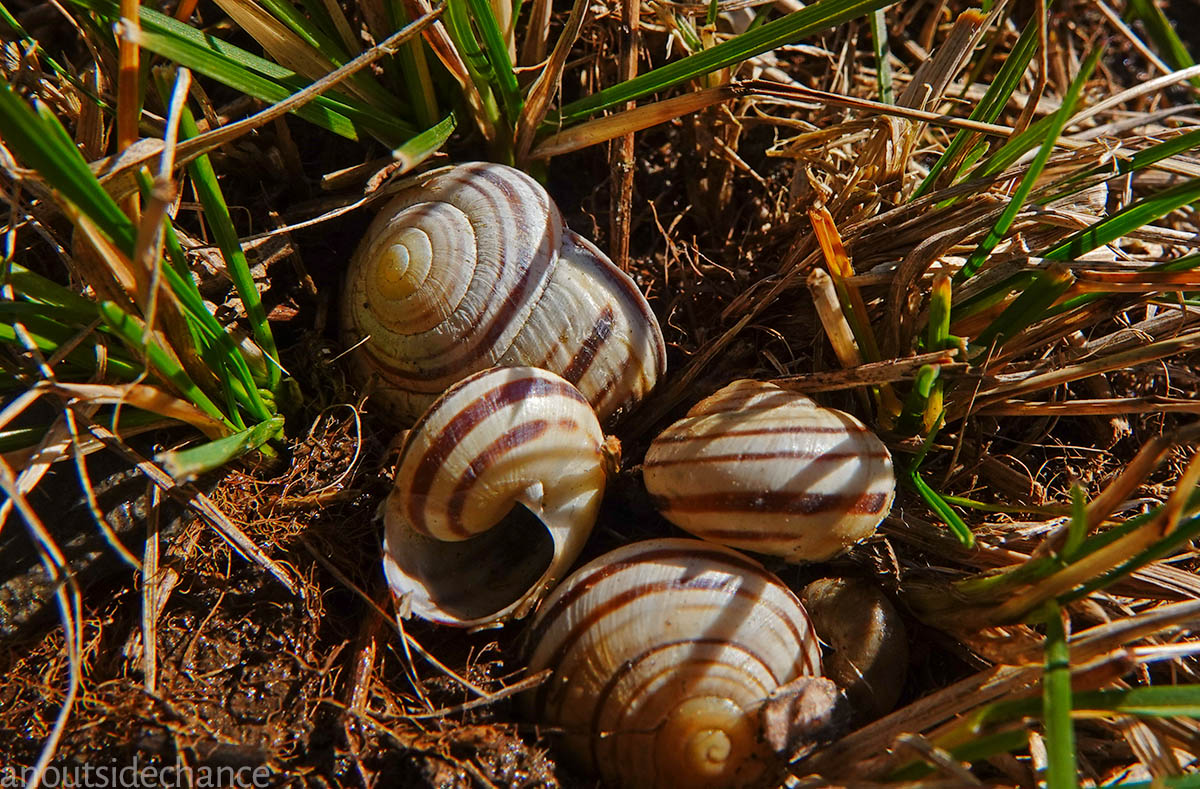 These days can be ever so quiet.

Some mornings the marsh is filled with geese and gulls, but other days the honks and screeches are far away.

A pair of foxes might criss-cross the marsh before dawn, tracing the edges of every island, but leaving no evidence that they found a single mouse to eat. 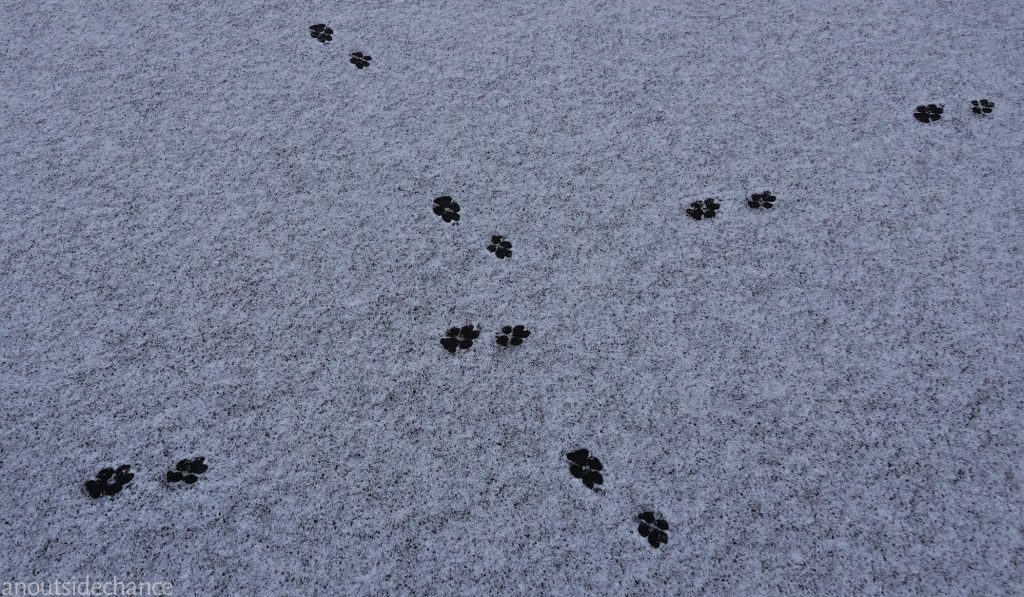 If you come to a fork in the road, take it

END_OF_DOCUMENT_TOKEN_TO_BE_REPLACED 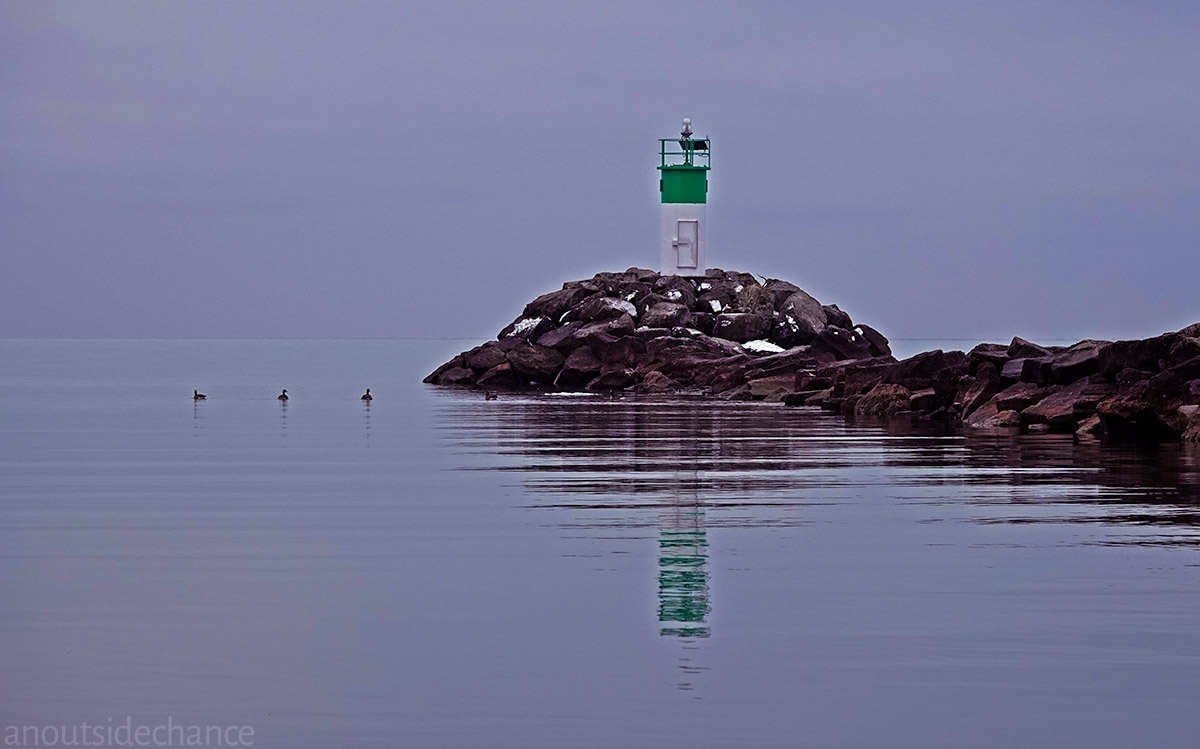 We’ve slipped into a new year, but perhaps not yet into a new winter.

With no ice on the lake and patchy ice on the marshes, moisture rises to the sky and cloud mutes the light of many sunsets and sunrises.

She Sells Seashells (By the Lakeshore)

The morning of January 2nd was one glorious exception, as a bright sun rose in time to light up the freshly fallen snow.

Light in the Woods 1 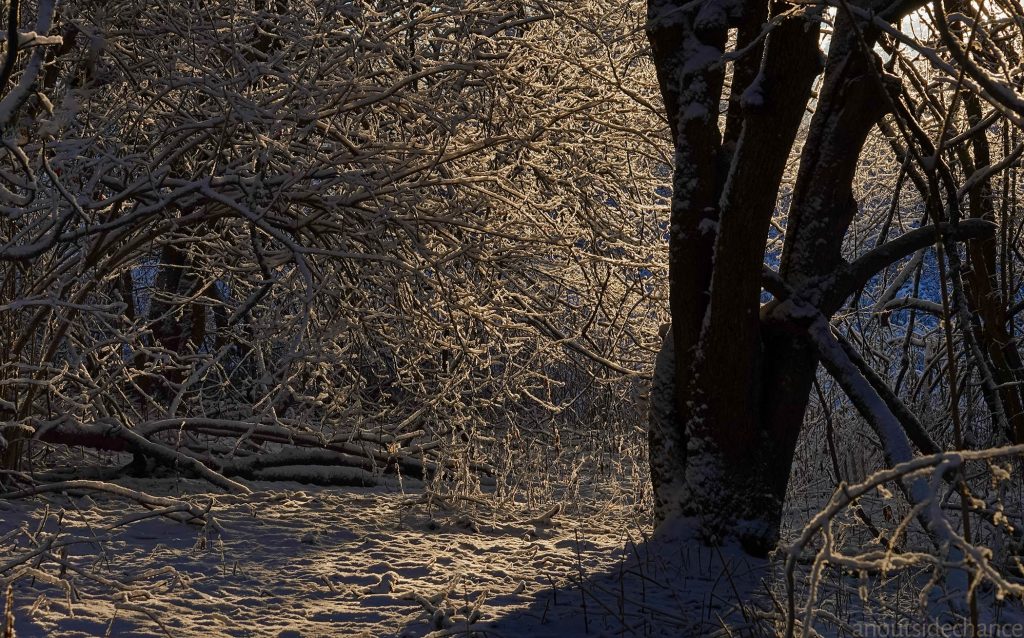 Light in the Woods 2 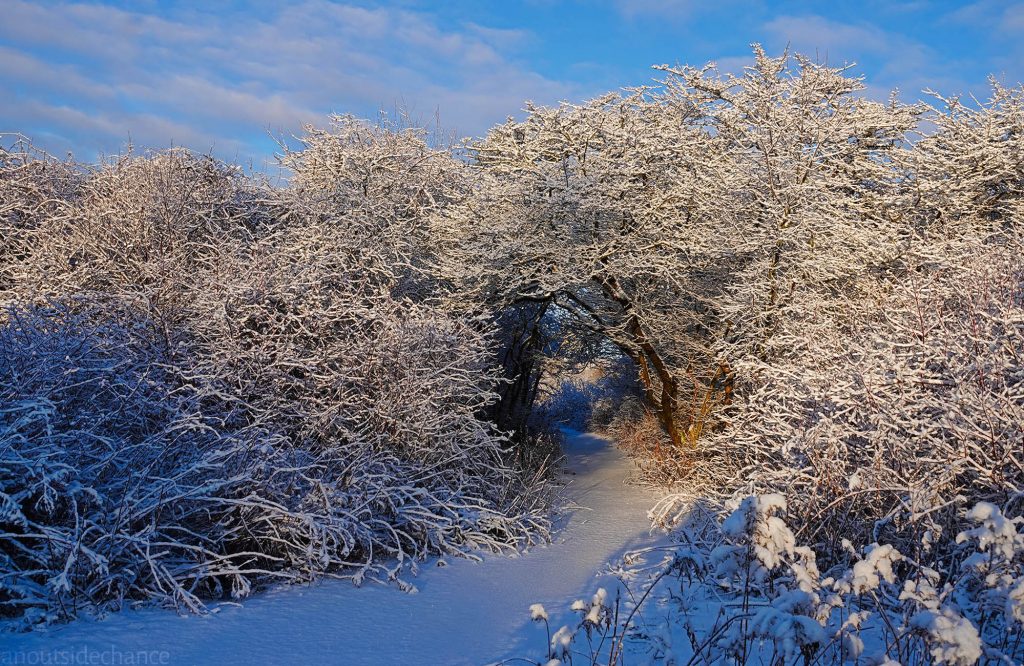 Light in the Woods 3

The shipping season on Lake Ontario, typically finished by the end of December, is still in swing with two ships coming to port in the past week. 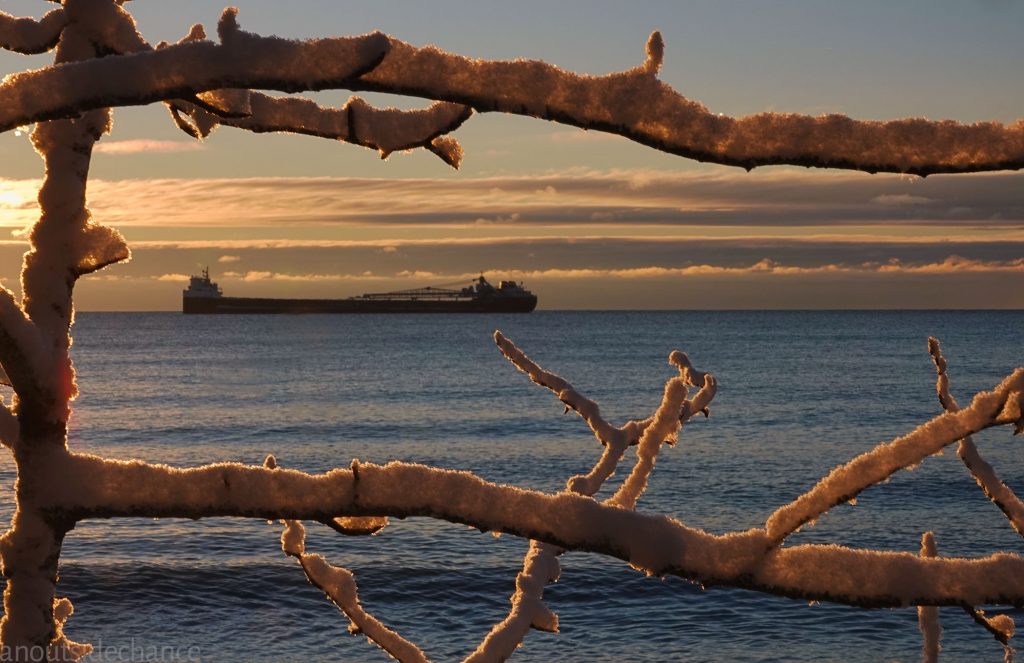 At the end of December we also had a fortuitous patch of clear sky, as the Long Night’s Moon rose over the lake before 5 pm. 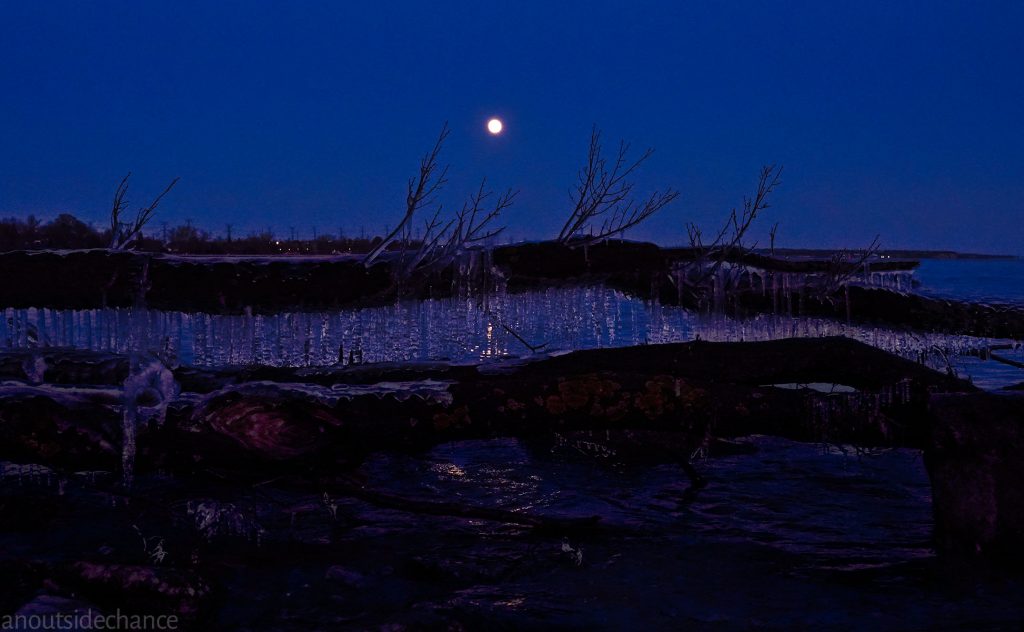 This full moon, named for its proximity to the Winter Solstice, is often also called the Cold Moon –  but this year even the nights have been mild.

Do the birds expect the warm trend to carry through January? I couldn’t help but wonder when I saw this Great Blue Heron on January 4, a good month later in the season than I had spotted any herons in previous years. 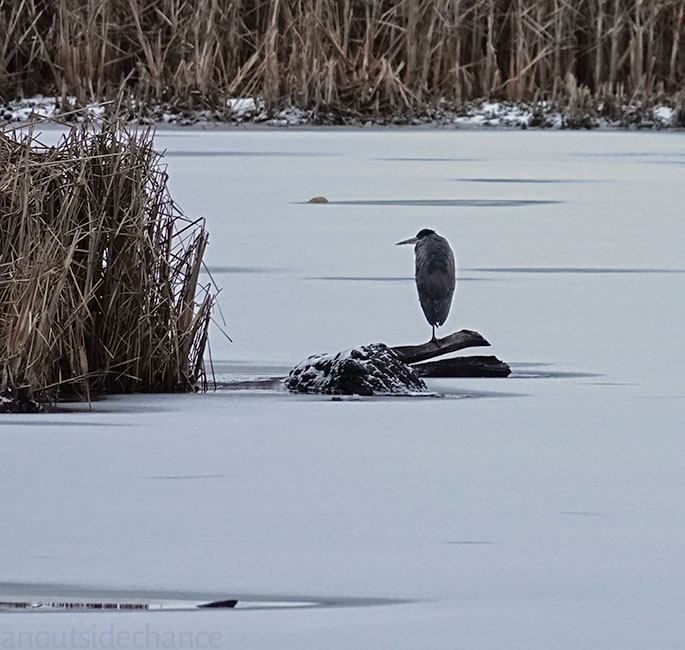