A proposal to excavate hundreds of millions of tonnes of limestone from beneath Lake Ontario raises many questions, starting with a big one: should we be planning for the continued expansion of the concrete industry, given what we already know about climate change?

St Marys Cement, a Canadian branch of Brazilian multinational Votorantim Cimentos, operates a limestone quarry and cement factory on the shore of Lake Ontario at Bowmanville, Ontario. The company wants to expand by tunnelling under Lake Ontario from the existing quarry, and removing up to 4 million tonnes of limestone a year for the next 100 years. (The Project Description for the expansion is here.) 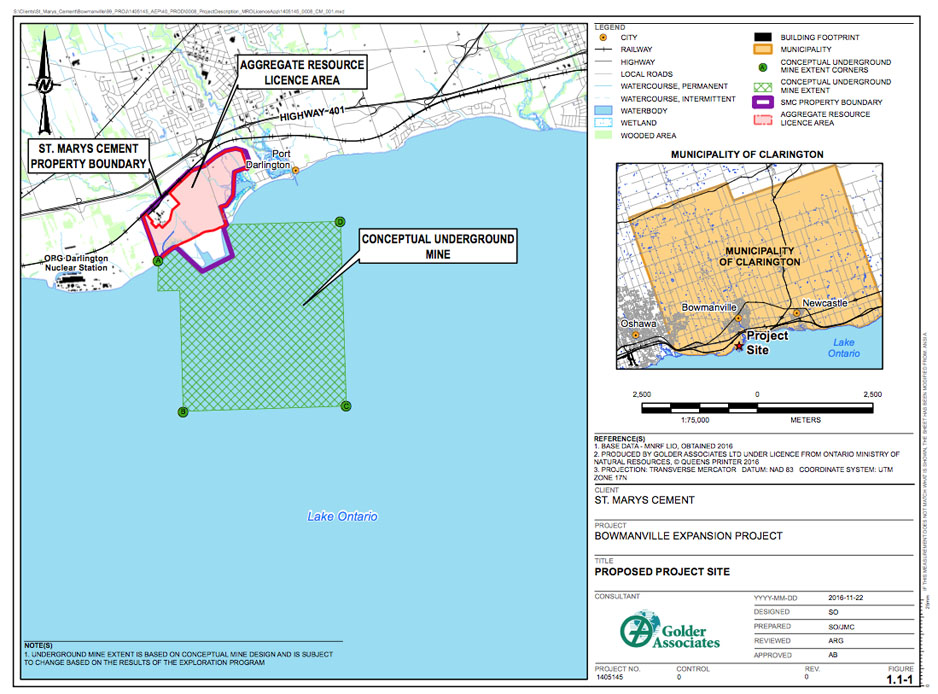 (A note on terminology: in this article I use “cement” to refer to the white powder that is mixed with gravel and water, and “concrete” to refer to the construction material that results when the gravel-cement mixture reacts with water and solidifies.)

While concrete is one of the most important and ubiquitous materials in modern life, the cement industry is a major source of greenhouse gas emissions, accounting for 8% of global carbon emissions (Macleans, 7 March 2016). The emissions occur because when limestone is cooked to transform it into cement its natural carbon content is released, and because it takes prodigious amounts of heat to effect this chemical transformation. That is why the St Marys plant in Bowmanville burns both coal and bitcoke (the black powder left over from bitumen after refining) by the shipload.

Not only is cement production carbon-emissions intensive, but the way we use cement tends to encourage further carbon emissions. The biggest share of cement in Ontario goes into concrete pavement which is used to widen roads and add new parking lots – which in turn promotes greater use of cars and trucks.

Which brings us back to the St Marys expansion plan. The company is not saying it will expand its cement production in Bowmanville, but the additional limestone will most likely be used with cement. For further clarity, the limestone extracted from under Lake Ontario will be marketed in industry parlance as “aggregate” – what most people refer to as gravel. And that aggregate will mostly be mixed with cement, to form concrete, or used as a base layer underneath slabs of concrete. In other words, the quarrying of limestone for aggregate will complement St Marys core business of quarrying limestone for cement.

Is a major new source of aggregate needed in the Toronto area? St Marys says in their Project Description:

The key phrase here is “given expected levels of economic and population growth”. If the economic trends of the past 20 years continue on the same track for the next 20 years, aggregate use will go up by 13 per cent – from 164 million tonnes per year to 186 million. In other words, if we continue Business As Usual, we will need more aggregate.

How is this aggregate used?

Aggregate and limestone are used for a wide range of applications in Ontario; however, the primary use is in construction work, either directly on construction sites, or in the manufacturing of concrete and other building products. Roads (provincial highways, as well as municipal and private roads) account for the largest share of aggregate used in construction work.” (Project Description, page 8) [emphasis mine]

Yet there is no evidence in the St Marys Project Description that anything other than a Business As Usual scenario is being considered. Regarding the carbon emissions of the project, the most substantive comment is that the quarry will have “reduced GHG [Green House Gas] emission intensity compared to other quarries that are located further from market.” The report does note, however, that “potential effects on climate change as a result of the Project will be characterized through the EA [Environmental Assessment] process.”

When this Environmental Assessment process gets underway, will St Marys be required to show that the expansion project is consistent with Ontario’s and Canada’s official climate policies? Stay tuned.